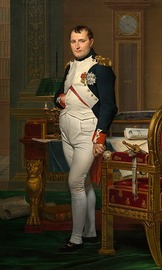 Napoléon Bonaparte was a French military and political leader. He rose to prominence during the French Revolution and led several successful campaigns during the Revolutionary Wars. He was the... Wikipedia